Sorry! You missed The Price at Wyndhams Theatre 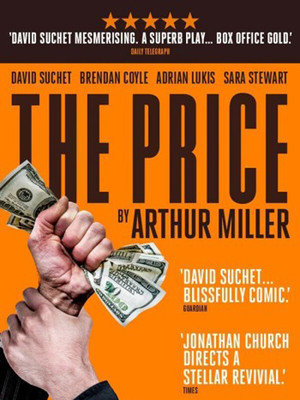 this is a worthy, weighty addition to the West End scene, anchored by two splendid performances, from the imitable David Suchet and Brendan Coyle

Why See The Price?

After a sell-out run in Bath comes the Jonathan Church helmed the production of Arthur Miller's The Price. Starring acting legend David Suchet and Downton Abbey favourite Brendan Coyle, this new production marks the 50th anniversary of the Miller classic.

The Price heads to the Wyndham's Theatre for a limited 12 week run from February 5! It transfers after a glittering run at the Bath Theatre Royal. Telling the story of two brothers at war with each other, The Price is lauded as one of Miller's most important works. Full of sensational wit, David Suchet performs a comic tour de force as slippery furniture dealer Gregory Solomon in this exploration of the pleasures and pitfalls of the American Dream.

The Price debuted on Broadway in 1968, garnering two Tony nominations and winning two Outer Critics Circle Awards. Since then the play had been revived four times on the Great White Way, with the most recent being in 2017 which starred the likes of Danny DeVito and Mark Ruffalo. This most recent revival is now a contender for the 2019 Olivier Awards where it is nominated for three gongs, including Best Play Revival, Best Actor in A Play (Suchet) and Best Supporting Actor in a Play (Adrian Lukis).

What is The Price about?

Following the death of the family patriarch, Victor Franz and his brother Walter return home to divide up the family assets; joining them are Esther, Victor's wife, an alcoholic, and a seedy furniture dealer who is determined to get the best price for his work, no matter the cost to anybody else. Thanks to the Depression, Victor made huge concessions in order to care for his father, whilst his brother Walter left to become a successful doctor. However, seeing everybody else paw over his parents' possessions bring out long-buried conflict within himself and forces him to question the value of his sacrifice.

Images are taken from the original Bath Theatre Royal production.

Set in an overcrowded attic room, intricately designed by Simon Higlett, The Price centres around the Franz sons who, after 16 years since their father's death, come together to finally sell off his possessions.

Seen The Price? Loved it? Hated it?

Sound good to you? Share this page on social media and let your friends know about The Price at Wyndhams Theatre.