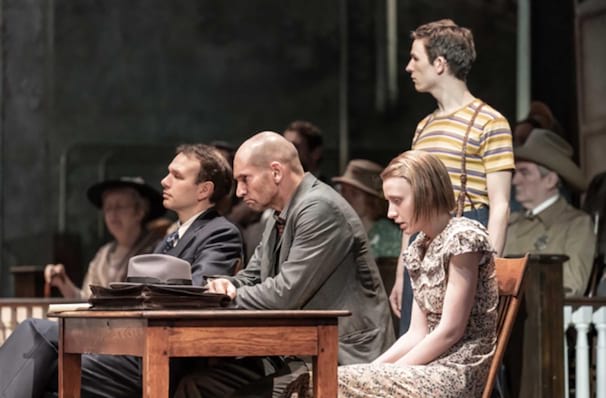 Arriving at the Gielgud Theatre in May!

Welsh acting star Rhys Ifans will star as lawyer Atticus Finch in the acclaimed Aaron Sorkin adaptation of Harper Lee's To Kill A Mockingbird, which is set to arrive at London's Gielgud Theatre next May!

Ifans, who has appeared in movies like Notting Hill, The Amazing Spider-Man and Official Secrets, will take on the role which was originated by Jeff Daniels when the production debuted on Broadway in 2018. Ifans' previous theatre credits include Exit the King (National Theatre), A Christmas Carol (Old Vic) and King Lear (Old Vic).

More cast is set to be announced in due course.

Barlett Sher, who garnered the Tony nomination for Best Direction of a Play for his work on the Broadway production, will return to direct this West End run.

What is To Kill A Mockingbird about?

Told through the eyes of 13-year-old Scout, Mockingbird is set in the pre-civil rights era Deep South of the 1930s. When local black man Tom Robinson is accused of raping a white girl, Scout's lawyer father Atticus Finch takes on the case, determined to try and give Tom a fair trial. With his decision to defend Tom, Atticus finds himself ostracised from the community, and the lives of his family put into danger. As the trial approaches, Atticus must choose whether to buckle under the mounting pressure or to stand his ground and fight for what is right.

To Kill A Mockingbird begins previews at the Gielgud Theatre on 21 May 2020.

View our show pages for more information about To Kill A Mockingbird, Gielgud Theatre.

Storming onto Broadway in late 2018 Aaron Sorkin's acclaimed adaptation of To Kill A Mockingbird heads to London in May! Adapted from the classic Harper Lee novel the production wowed Broadway's critics,...more info