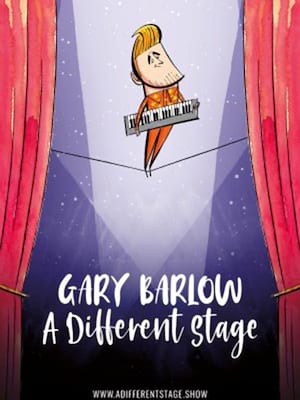 All logos, graphics, and imagery are property of the production

A brave and beautiful retelling of his whole life story

Why See A Different Stage?

After a dazzling UK tour, Gary Barlow brings his theatrical one-man show, A Different Stage to the capital this summer for an extra special three-week run. Created by Barlow and his longtime pal and collaborator Tim Firth, Gary takes us on an unadulterated journey through his life and career, using his back catalogue to narrate his story.

And what a story it is! From finding fame in the 90s with Take That to the band's breakup and eventual blockbuster reunions, Gary has had a time of it, all whilst becoming a six time Ivor Novello award-winning songwriter and candidate for a national treasure. Discover his story in his own words, where no topic is off-limits, in the exciting London debut of A Different Stage.

Seen A Different Stage? Loved it? Hated it?

Sound good to you? Share this page on social media and let your friends know about A Different Stage at Duke of Yorks Theatre.