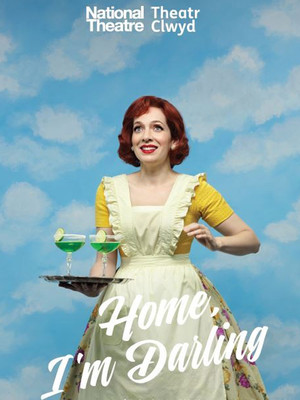 From Laura Wade, the critically acclaimed play, Home, I'm Darling transfers to the West End's Duke of York's Theatre this January. With Olivier Nominee Katherine Parkinson reprising her starring role as Judy, this unique comedy-drama takes aim at the 1950s and one woman's singular obsession with becoming the ultimate domestic goddess.

Wade's first play since her ground-breaking Posh, Home, I'm Darling dives behind the potential facade of a 'happy marriage', asking what the epithet truly means. Tamara Harvey returns to direct the Evening Standard Award-nominated production, with co-production from Theatre Clwyd and Fiery Angel.

What is Home, I'm Darling about?

Judy and her husband Johnny appear to have the perfect post-war era life. From all the decade's mod cons to their vibrant decor and clothes, they seem to have stepped straight out of the pages of Good Housekeeping. Despite their bliss, they are somewhat of an enigma to their more forward-thinking friends. As cracks begin to show, it isn't long until the gingham curtains are thrown wide open and Judy discovers being a model housewife isn't quite as easy as it appears in the magazines...

Images are taken from the National Theatre production and may not reflect current cast.

Starring a luminous Katherine Parkinson, what starts as a fizzy domestic comedy very quickly becomes a shattering discourse on feminism, questioning a woman's right to choose how she lives her life.

L.P. Hartley once said "The past is a different country, they do things differently there" and oh boy was he right. This is especially true in the case of the fabulous Home, I'm Darling.

Sound good to you? Share this page on social media and let your friends know about Home, I'm Darling at Duke of Yorks Theatre.