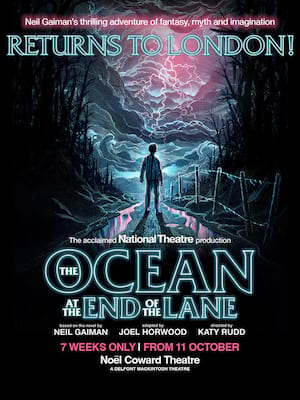 The Ocean at the End of the Lane

Why See The Ocean at the End of the Lane?

Nominated for Best New Play at the 2020 Olivier Awards!

Described as a mesmerising piece of theatrical magic, Katy Rudd and Joel Horwood's adaptation of Neil Gaiman's 2013 novel was a huge hit at the National Theatre over Christmas last year and now returns to cast its spell over the West End in 2021 when it transfers to the Duke of York's Theatre in October. A fantastical adventure that follows two young friends as they set out to defeat nefarious supernatural forces, it's Gaiman on fine form, brought to life by breathtaking effects, puppetry and more.

When our hero returns to his childhood home for a funeral, he is suddenly overcome by the vivid memories of a spring over 40 years before. At that time, he had a best friend, Lettie Hempstock, who claimed the duck pond behind her house was actually a vast ocean. Diving headlong into his past, our hero confronts the true nature of Lettie and her unusual family, and the epic battle they waged against unsettling magic they faced together so long ago.

Please note: This production contains scenes that some people may find distressing and strobe lighting.

Two hours and 20 minutes including interval

Seen The Ocean at the End of the Lane? Loved it? Hated it?

Sound good to you? Share this page on social media and let your friends know about The Ocean at the End of the Lane at Duke of Yorks Theatre.