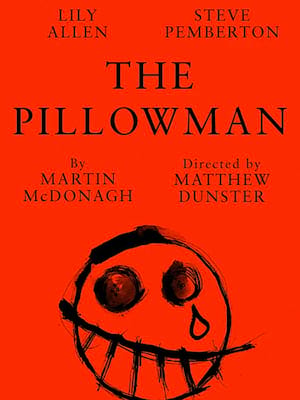 The Pillowman is a spellbinding stunner of a play.

Why See The Pillowman?

Master of macabre comedy, Martin McDonagh is once again represented in the West End this summer as his Olivier winning 2003 play, The Pillowman returns in this new revival directed by Matthew Dunster, starring Aaron Talyor Johnson and Steve Pemberton.

A 'savagely funny' examination of the role of the artist in society and the price of expression, The Pillowman follows a writer and his brother, who under the shadow of a totalitarian regime, are targeted by the authorities after his grisly short stories appear to be the inspiration for some gory child murders.

In classic McDonagh style, expect a witty, caustic and electrifying production that does not shy away from the darker side of life!

As one of the League of Gentlemen, Steve Pemberton has been creeping us out for well over two decades. Currently starring in Inside No.9 alongside fellow 'Gentleman Reece Sheersmith, he's become one of the nation's foremost writers and players in black comedy.

From Nowhere Boy to Nocturnal Animals to Kick-Ass, Aaron Taylor Johnson is a gifted actor and screenwriter who always delivers a magnetic performance.

Seen The Pillowman? Loved it? Hated it?

Sound good to you? Share this page on social media and let your friends know about The Pillowman at Duke of Yorks Theatre.