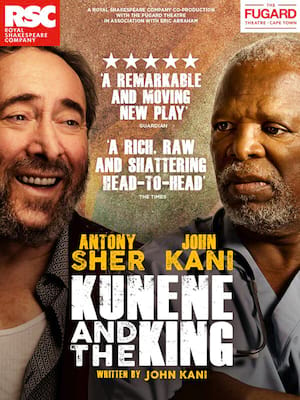 Kunene and the King

The play runs for 100 minutes but in that short time it offers a rich portrait of a relationship and a society.

Why See Kunene and the King?

A Poignant Exploration Of Race & Division

Following a triumphant world premiere in Cape Town, South Africa and an equally triumphant debut at Stratford-upon-Avon's Swan Theatre, the Royal Shakespeare Company's production of Kunene and the King enjoys a West End transfer in early 2020. Marking the 25th anniversary of the abolishment of Apartheid, the strictly limited run at the Ambassadors Theatre shines a light on the writing and acting talents of celebrated activist and playwright John Kani, a frequent collaborator of protest playwright Athol Fugard.

Set in present day South Africa, two men from radically different backgrounds come together in an extraordinary way. Two-time Olivier Award-winning actor Anthony Sher portrays Jack Morris, a classical actor at a cross roads - just as he's been given the role of a lifetime, he's also received a severe cancer diagnosis. Enter Kani's Lunga Kunene, a black carer and at-home-nurse. Their very different experiences of life pre and post Apartheid at first collide, but as old antagonisms fall away they are united by a passion for Shakespeare and similar relationships with their families.

Seen Kunene and the King? Loved it? Hated it?

Sound good to you? Share this page on social media and let your friends know about Kunene and the King at Ambassadors Theatre.