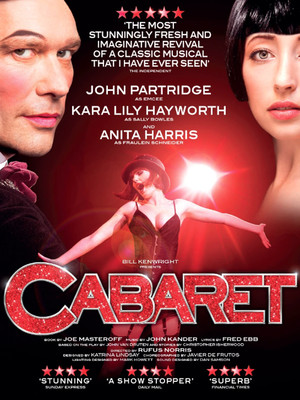 In Here, life is beautiful

Put down the knitting, the book, and the broom and come to the cabaret! 2020 sees a brand new tour Kander and Ebb's showstopping musical, directed by the National Theatre's Rufus Norris. Starring Celebrity Masterchef winner John Patridge as the wickedly funny Emcee, Kara Lily Hayworth (Cilla Black the Musical) as the vivacious Sally Bowles and Anita Harris as Fraulein Schneider, it's time to head down to the smoky surround of the Kit Kat Club for a night of song, dance and hedonism!

A doomed romance in a city that dances on the edge of oblivion, Cabaret is one of the true classics of musical theatre, weaving together strands of debauchery and terror to capture a moment in time, that despite the warning, is ever in danger of being repeated.

Featuring Kander and Ebb's unforgettable music (including 'Wilkomen' 'Maybe This Time' and of course, the titular 'Cabaret') and a book by Joe Masteroff, (based on the novel Goodbye to Berlin by Christopher Isherwood,) it is the story of an American writer and an entrancing showgirl who find themselves in Weimar era Berlin, as the shadow of fascism grows in the country. From inside the decadence of the Kit Kat club, they and their fellow artists, creatives, freaks and weirdos attempt to eek every last bit of freedom before the Nazis take over.

Seen Cabaret? Loved it? Hated it?

Sound good to you? Share this page on social media and let your friends know about Cabaret at New Wimbledon Theatre.