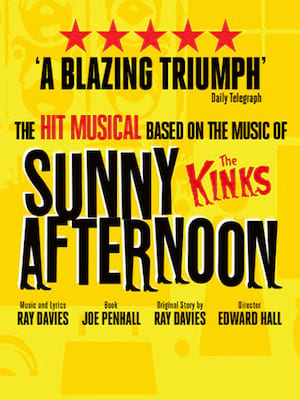 Pop lovers would be mad to miss it

This hit musical is back and ready to head out on tour in 2020, giving audiences across the UK the chance to discover the story of The Kinks - sprinkled with a little Olivier-winning musical stardust of course! Written by Joe Penhall with music and lyrics provided by Ray Davies, Sunny Afternoon was a hit in London in 2014, where the production scooped up four 2015 Oliver Awards, including Best New Musical. Now resurrected by Sonia Friedman Productions, it's time to Come Dancing once more!

Follow the lads back to those golden days astride the conservative Fifties and free-wheeling Sixties, where Ray and his brother Dave Davies and their band work their way to chart success in Britain, then the States, before getting barred for their on-stage rowdy antics at the height of the British Invasion.

In 1963, a group of mouthy lads from Muswell Hill, led by brothers Ray and Dave Davies set out to change the world with their hard-rocking and witty social commentary. More anarchic than the Beatles, they led the way in crushed velvet suits and Chelsea boots, stomping a riotous path to America, with a few breaks to swing from the chandeliers along the way. From London to state-side, Ray's sensitive lyrics were combined with Dave's high-kicking antics, leading to an unheard-of four-year ban from the U.S! Dumped back into depressed poverty in London, they staged an uproarious comeback in the wave of the World Cup optimism of 1966. This is the definitive story of The Kinks and we dare you not to dance all the way home.

Two hours and 45 minutes including one interval

Please note, images are taken from the West End production, casting yet to be announced

Best Actor in a Supporting Role in a Musical - George Maguire

Sunny Afternoon the real deal, taking on those four mouthy lads from Muswell Hill and crafting a wonderfully fresh and funny show around them.

I haven't seen a jukebox musical unless you count cringing through Mamma Mia at my mother's 50th birthday party, but I don't like to think about that as a jukebox, or at all...But I have seen Ray Davies, twice. Once live..

Sound good to you? Share this page on social media and let your friends know about Sunny Afternoon at New Wimbledon Theatre.