You are viewing a past performance of A Midsummer Night's Dream

You can catch A Midsummer Night's Dream at the Shakespeares Globe Theatre, showing June 1 - October 7, 2020 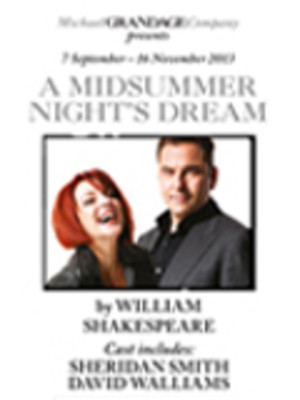 Shakespeare has seldom, if ever, seemed sexier.

Why See A Midsummer Night's Dream?

A MOST RARE VISION!

Set in the psychedelic sixties, Michael Grandage's revival of Shakespeare's most popular comedy is fast-moving and spectacular, with brilliantly realized design by Christopher Oram and casting described by critics as inspired. The spirited and fast-moving production sees award-winning Sheridan Smith in the roles of both Hippolyta and Titania, while TV star and comedian (best known perhaps for his appearances in Little Britain) dives into the role of Nick Bottom.

Dazzling and inventive, hilarious and racy, A Midsummer Night's Dream springs to life in an entirely new way and flips many an expectation on its head.

WHAT'S A MIDSUMMER NIGHT'S DREAM ALL ABOUT?

A comic tangle of love stories and mischief, A Midsummer Night's Dream plaits together four worlds, connected by the wedding of Theseus, the good-natured Duke of Athens, and the proud Amazonian queen Hippolyta. Fiesty Hermia and gentlemanly Lysander are happily in love. Helena loves Demetrius, who previously loved Helena but now loves Hermia. Hermia's father Eqeus has arranged that she marry Demetrius, but she refuses; thus Eqeus takes the matter to the Duke to settle. Theseus issues an ultimatum and, to skirt death or a forced marriage, the love-locked pair, pursued by Demetrius and Helena, flee to the forest where they perchance upon a band of fairies (of the most suprising sort) and a group of rehearsing amateur actors. The tospy-turvy tale dips into a dreamlike world of magic, mischief and mirth.

A veritable tour de force in British theatre, Michael Grandage's works have been showered with awards, including Tony, Olivier, Drama Desk, Critics' Circle, Evening Standard and South Bank Awards. His production of A Midsummer Night's Dream first opened in the West End in 2013 as part of a season of five plays by the Michael Grandage Company.

Christine Adams: “Brilliant performance from all the cast”

I was looking forward to this because of the big names, David Walliams... more

Amazing production with an incredible cast. Highly accessible with the... more

Sound good to you? Share this page on social media and let your friends know about A Midsummer Night's Dream at Noel Coward Theatre.