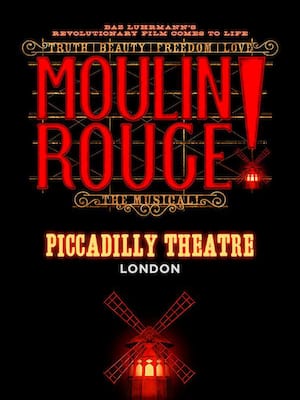 Why See Moulin Rouge! The Musical?

You can can can!

Spectacular, specular! The Broadway smash hit Moulin Rouge! The Musical is now playing in the West End! After thrilling audiences and critics alike in New York, this sumptuous production is based on the exhilarating Baz Lurhmann film of the same name and is directed by Alex Timbers, with gorgeously designed by Derek McLane. Evoking the film's Demi-Monde flavour, Moulin Rouge! The Musical is a sumptuous experience, from the moment you take your seat!

Baz Luhrmann's Moulin Rouge! is cemented into the worldwide canon of iconic movies. With a glittering cast featuring Nicole Kidman and Ewan McGregor, and a set that would astound the most cynical viewer it's no wonder that Moulin Rouge! went on to be one of the most award-nominated movies of all time. When released in the early 2000s it was nominated for an outstanding 129 awards, winning two Academy Awards, three Golden Globes, and one BAFTA. A feat the musical adaptation ahas already began to match - in 2020, it won an eye-watering 10 Tony Awards!

The year is 1900 and Christian, a young poet and talented writer has come to Paris to pursue a career and become a member of the Bohemian movement there. Christian ends up falling hopelessly in love with Satine, the star of the infamous Moulin Rouge, however, Satine has already been promised to the unscrupulous Duke. A love triangle ensues, as Christian and Satine try to stay together against all odds they are led down a dark and dangerous path but Satine is holding a terrible secret of her own...

Lurhmann's Moulin Rouge is based on the famous Puccini opera, La Boheme!

Lynne Hutcheon: “A musical feast for the soul”

It will seduce and electrify every one of your senses. Song after song... more

Wow! I had high hopes this lived up to the film and it did not disappoint.... more

Sound good to you? Share this page on social media and let your friends know about Moulin Rouge! The Musical at Piccadilly Theatre.