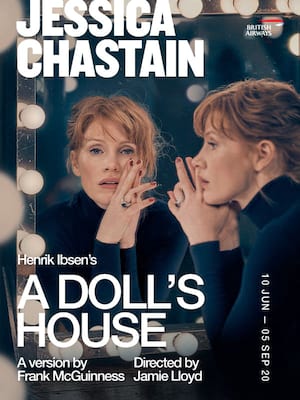 Why See A Doll's House?

Hollywood powerhouse Jessica Chastain makes her West End debut in a new version of the Henrik Ibsen classic, A Doll's House, marking the final production of the Jamie Lloyd Company residency at the Playhouse Theatre. The 1800's masterpiece is directed by Lloyd himself and adapted by Frank McGuinness.

Known for her stunning performances in Molly's Game and Interstellar, Chastain will take on Nora, one of theatre's most prolific heroines, in this strictly limited run.

What is A Doll's House about?

Nora Helmer spends her days in exquisite comfort as the wife of the wealthy Torvald. Mother to his three children Nora flits around their grand house like a prized toy, treated with gifts and fine food. However, when her financial dependency becomes increasingly more apparent Nora's opinions on the status quo begin to shift, throwing her marriage and family into disarray.

Seen A Doll's House? Loved it? Hated it?

Sound good to you? Share this page on social media and let your friends know about A Doll's House at Playhouse Theatre.