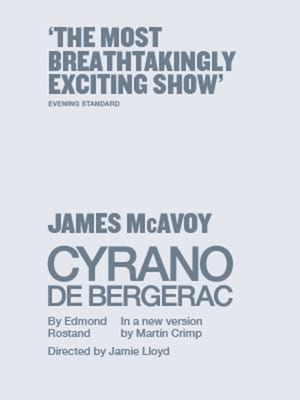 A West End Return for McAvoy

Hollywood heavyweight James McAvoy is back in the West End in the Jamie Lloyd (Betrayal, The Ruling Class) helmed revival of Edmond Rostand's 1897 play, Cyrano de Bergerac. Adapted by Martin Crimp, Cyrano de Bergerac follows a swashbuckling soldier whose quest for true love makes him confront his biggest insecurity... his rather larger nose.

A story about the power of love and the art of wordplay, Edmond Rostand's original Cyrano de Bergerac was famed for featuring some of the theatre's most ingenious lines. An ever-enduring masterpiece, don't miss your chance to see James McAvoy star in this rarely revived production!

This production of Cyrano de Bergerac kicks off a brand new season of Lloyd directed productions which will run at the Playhouse Theatre through to August 2020.

A firm block-buster favourite for his starring roles in X-Men, Atonement, Split plus many many more (the list really does go on), McAvoy was last seen in the West End in 2015's The Ruling Class, also directed by Lloyd, at the Trafalgar Studios. McAvoy's stirring performance as Jack Gurney earned the star his second Olivier Award nomination for Best Actor and the Evening Standard award for Best Actor. McAvoy's other West End credits include his Olivier Award-nominated turn as Macbeth in 2013 Trafalgar Studios production and Three Days of Rain at the Apollo Theatre, for which he gained his first Olivier Award nomination in 2009.

Although its base material is still dazzling Jamie Lloyd's production transforms the 19th century masterpiece into a 21st century delight. Coupled with a stellar cast, and crew, this version of Cyrano de Bergerac is nothing like you've ever seen

I watched it live from Tennessee in our local movie theater. Felt like... more

Edwina Ellis: “Not what I was expecting”

If you go expecting doublet and hose, swashbuckling swordfighting, then... more

Sound good to you? Share this page on social media and let your friends know about Cyrano de Bergerac at Playhouse Theatre.