Sorry! You missed Fiddler on the Roof at Playhouse Theatre 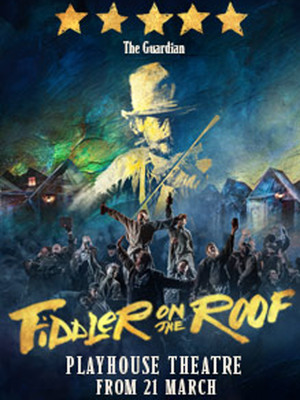 Fiddler on the Roof

A resonant slice of history...and a warm, absorbing folk tale that strikes unerringly at the heart with the timeless simplicity of its themes: home, family, love.

Why See Fiddler on the Roof?

Sir Trevor Nunn's hit revival of the classic, Fiddler on the Roof, heads to the West End this year after a sell-out run at the Menier Chocolate Factory. A musical theatre icon, the story of Tevye and his wayward daughters continues to prove to be a popular draw to audiences all over the world, with the musical recently celebrating an exciting Broadway revival and US tour.

With Olivier award winner, Andy Nyman and Judy Kuhn set to return to reprise their roles of Tevye and Golde respectively, Fiddler on the Roof is set to be one of the hottest tickets on the West End this season!

With some of the canon's most beloved songs including the enduringly catchy 'If I were a Rich Man,' the meditative 'Sunrise, Sunset and the spirited 'Matchmaker, Matchmaker', it illustrates Tevye's devotion to his Jewish faith in the face of cultural changes as he tries to marry his five daughters off in rural Imperial Russia. Full of humour, warmth, honesty and celebration of the proud Jewish tradition, it has been praised as "one of the first popular post-Holocaust depictions of the vanished world of Eastern European Jewry". It's cultural influence still endures to this day, making it one of the most popular amateur productions worldwide.

What is Fiddler on the Roof About?

At the turn of the 20th Century, Russia is a country on the brink of revolution. Although the chaos seems to seldom touch the isolated family of Tevye the Milkman, he sees the effect on his three elder daughters and the lives that they choose the lead.

Tzeitel, the oldest has little prospects for a poor woman, when the widowed and ancient butcher Lazar Wolf shows interest in her whilst she pines for the poor tailor Motel, it begins a story of rebellion, violence, love and acceptance that finds Tevye and the family learning to leave behind their old lives and start a new one full of hope and laughter!

Images are taken from the Menier Chocolate Factory production and may not reflect the current cast.

I hope that one day the story of Fiddler on the Roof is no longer needed but, as we fight for change, we can also enjoy this spellbinding and simply enchanting musical. To Life!

If you had asked Jerry Bock, Sheldon Harnick and Joseph Stein, if their 1960s hit musical about a group of Orthodox Jews in Russia, would still be so popular - and still relevant! - over forty years later, they probably would have laughed in your face.

Seen Fiddler on the Roof? Loved it? Hated it?

Sound good to you? Share this page on social media and let your friends know about Fiddler on the Roof at Playhouse Theatre.