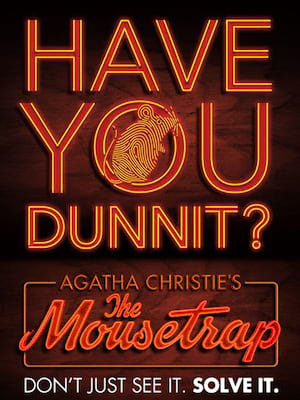 The Moustrap is to the West End what ravens are to the Tower of London, it's disappearance could impoverish us

Why See The Mousetrap?

now in its 70th year

In 1952, Agatha Christie's sprawling and intricate new whodunnit, The Mousetrap (based on her radio play, Three Blind Mice), opened in the West End on a very strict condition; no audience or press member was to ever give away the plot of the show!

Christie herself was not altogether positive as to the play's run, giving it eight months 'at most', so perhaps her edict seemed fair at the time. But it is a testament to theatre audiences that The Mousetrap has endured at St. Martin's Theatre, running for an incredible seventy years to date. To put that into perspective, when the show first played, Winston Churchill was Prime Minister, London still suffered from the Great Smog, the NHS was just four years old, and Dame Vera Lynn dominated the hit parade!

Seven decades have done nothing to dull The Mousetrap, the story of an odd assortment of guests snowed in at Monkswell Manor, whilst a murderer is at large and en-route. But could they be already here? When bodies start showing up, it's up to the stranded group to solve the mystery, before they become a part of it?

Wonder why you haven't seen the film? The secrecy around the plot wasn't the only condition laid down by Dame Agatha. A film adaptation is only allowed six months after the West End production closes, and given that it has been going strong for nearly seventy years without any sign of ending, that doesn't look all that likely any time soon!

The Mousetrap is recommended age for children is 12 years and up. Young children are admitted but not encouraged unless the parent is confident that the child is old enough to be attentive to the performance and not a distraction for other members of the audience. Everyone must have a valid ticket and occupy a seat. Accompanying adults will be asked to remove any noisy infants.

C Reidy: “Suspense to the end”

I'm not a huge fan of Christie, but this play delivered. It was much fun,... more

Sound good to you? Share this page on social media and let your friends know about The Mousetrap at St Martins Theatre.