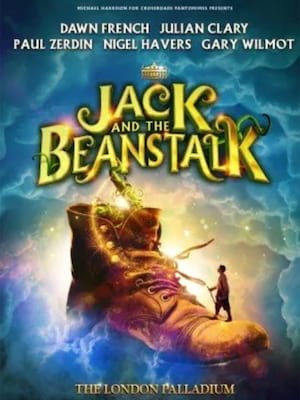 All images, logos and graphics are property of the production.

Jack and the Beanstalk

A GIANT panto comes to The London Palladium!

Why See Jack and the Beanstalk?

FE-FI-FO-FUM we smell the blood of brand new Palladium panto! Coming to London this Christmas, the team behind the last few glittering years of panto-perfection at the venue present this Giant hit, with more laughs, lavish costumes, and breathtaking sets than ever! Starring Dawn French and Alexandra Burke (in her Panto debut) alongside the dazzling ensemble of Julian Clary, Paul Zerdin, Gary Wilmot and the one and only (Nigel) Havers, expect another monumental family hit in 2022. Further cast TBA!

A true classic of the panto repertoire, Jack and the Beanstalk is the story of young buck Jack, who heads to market to sell his hard-up family's last cow. But instead of coming up with some decent cash, the silly boy comes back with a handful of 'magic beans' much to his mother's chagrin. Throwing them on the floor, she sends Jack to bed without any dinner. But during the night a massive beanstalk grows from the beans, leading to a huge castle. Jack sees his opportunity and climbs up finding a fearsome Giant's home! Seeing his chance, he decides to lift a few items, including a magic harp and a goose that lays golden eggs. But the Giant isn't going to let this home invasion slide, leading to a massive adventure for Jack, his mother and the whole village!

Parental discretion is advised due to innuendo. No under 4s admitted.

Two hours and 15 minutes including interval

Seen Jack and the Beanstalk? Loved it? Hated it?

Sound good to you? Share this page on social media and let your friends know about Jack and the Beanstalk at London Palladium.