Sorry! You missed Reputation The Musical at The Other Palace 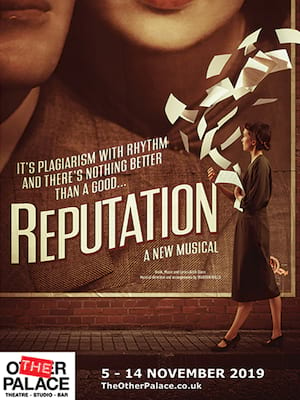 A compelling exploration of plagiarism and the fight against gender inequality

Why See Reputation The Musical?

The World Premiere Of Reputation The Musical

The hotly anticipated world premiere of up and coming playwright Alick Glass' Reputation The Musical flies into the West End for a fleeting ten performances. Playing at the Other Palace Studio this Autumn, the rollicking retro tale features 25 fresh new songs and ballads in the style and tradition of the American Songbook and the Tin Pan Alley greats, which punctuate a journey into golden era Hollywood that's simply not to be missed.

Set in the 1930s at the height of the industry's transition from silent film to "talkies", the story follows Freddy Larceny, an aptly named con artist who makes his dime plagiarising the scripts of new, naive writers. Larceny meets his match in Michelle Grant, an aspiring novelist, who falls prey to Larceny's gambit. When he steals her script for a film that goes on to receive an Academy Award nomination, she begins a riveting fight for rightful recognition.

The show is refreshing and entertaining. the songs are just beautiful you... more

Sound good to you? Share this page on social media and let your friends know about Reputation The Musical at The Other Palace.