Sorry! You missed Our Lady of Kibeho at Theatre Royal Stratford East 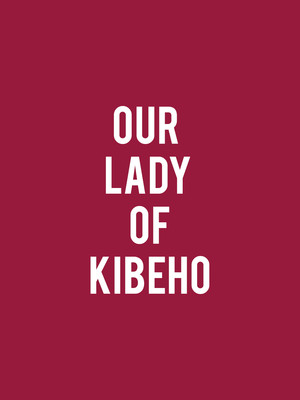 Our Lady of Kibeho

Hall's virtue is that she puts a complete world on stage, one that embraces a cloistered college, a faith-hungry village and tribal hatred.

Why See Our Lady of Kibeho?

African-American playwright Katori Hall's heavy hitting-drama Our Lady Of Kibeho shocked and captivated audiences when it debut stateside at the beginning of this year. Chronicling the alleged holy vision of three school girls, she turns the real life saga into a thought-provoking religious thriller filled with bubbling tension, joyful rapture and historical context. The drama enjoys a hotly anticipated London premiere at Stratford East to commemorate the 25th anniversary of the Rwandan genocide.

The play begins when three young village girls see a vision of The Virgin Mary whilst studying at a local Catholic college. Given a message that Rwanda is about to become hell on earth, the occurrence riles the community and tensions between the school's Ttusi headmaster and Hutu deputy rise, made worse by the arrival of the church's representatives on earth - The Vatican. Faith, miracles and hysteria collide as one of history's most violent events begins to engulf the nation.

Seen Our Lady of Kibeho? Loved it? Hated it?

Sound good to you? Share this page on social media and let your friends know about Our Lady of Kibeho at Theatre Royal Stratford East.