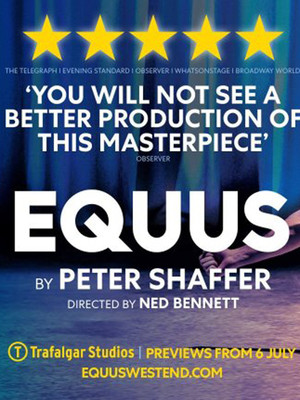 You will not see a better production of this masterpiece

Hot off the back of a five-star run at Theatre Royal Stratford East and a subsequent U.K tour, Trafalgar Studios will host the West End premiere of Ned Bennet's stunning revival of Peter Schaffer's 1973 masterpiece this summer.

Retaining much of its original cast, including Ethan Kai as troubled teen Alan Strang and Zubin Varla as Dr. Martin Dysart, the psychiatrist charged with unraveling his motives, the odds are that this transfixing psychodrama will surely repeat it's out of town success and become one of the season's most sought-after tickets.

The story of Equus

Over two and half riveting hours, Schaffer's play introduces us to Alan Strang's haunting story. After blinding six horses in a twisted fit of sexual and religious mania, it's up to Dr. Martin Dysart to question the boy and discover the cause of his violent behavior. But as Dysart delves into Alan's obsession, it only serves to loosen his own grasp on reality - soon serving to blur the lines between 'right' and 'wrong' irrevocably.

Two hours and 40 minutes with one interval

truly a brilliant adaptation, weaving performance and stagecraft into the reigns of a horrifying yet cathartic tale.

Cantering into the West End after a highly acclaimed run at Stratford East earlier this year, it is safe to report that Ned Bennet's revival of Peter Shaffer's 1973 masterpiece is thoroughly deserving of this transfer.

Seen Equus? Loved it? Hated it?

Sound good to you? Share this page on social media and let your friends know about Equus at Trafalgar Studios 1.