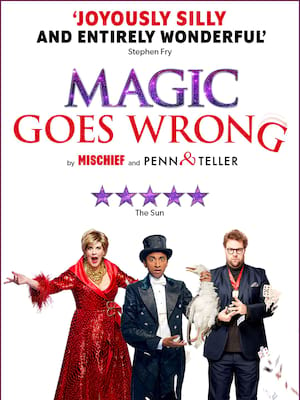 Funny and entertaining...fusion of magic and comedy from Mischief Theatre

Nominated for Best New Comedy at the 2020 Olivier Awards!

From the minds behind The Play That Goes Wrong and The Comedy About A Bank Robbery comes a brand new, and disaster-prone, magic show! Co-created between the world's most iconic magical duo and Mischief Theatre, Magic Goes Wrong sees one group of hapless magicians try and raise money for charity.

Teaming up with magical icons Penn & Teller (the longest-running headline act in Las Vegas) Magic Goes Wrong not only features Mischeief's signature mishaps and merriment, but also great magical trickery that will wow even the most stalwart of illusion-haters.

With doves, a mind reader a circus double-act this brand new comedy has everything you'd want for a night of illusion, with a little bit of Mischief Theatre magic thrown in.

Please note that Penn & Teller are co-creators and will not be appearing on stage.

The Play That Goes Wrong
The Comedy About A Bank Robbery

Mike H: “Brilliant show that had us In fits of laughter”

We saw this on a Sunday afternoon and it made our weekend. As with the... more

Sophia B: “Lots of laughs - and some real magic”

We loved last night's performance - in a packed Vaudeville Theatre. The... more

Sound good to you? Share this page on social media and let your friends know about Magic Goes Wrong at Vaudeville Theatre.