What Did We Think Of Frozen?

Did it thaw our heart or freeze us over?

Now showing in the West End at the refurbished Theatre Royal Drury Lane, Frozen the Musical opened its doors and transported us to Arendelle. Here's what we thought of Disney's next biggest hit.

The year was 2013, the air cool and crisp and little did we know our lives were about to be taken over by a princess who shot ice out of her hand like she was an Arctic Spiderman. Our stores, TV and radios were about to have 'Let it Go' on repeat and every child the eye could see would soon be donning a sparkly blue dress with a blonde plaited wig. With three nieces, one of which owns the full Elsa costume and demanded she wore it on Halloween (scary I know), I was already ready to put Frozen to bed - lock it away, and throw away the key. Fast forward nearly 10 years, and I find myself sat in a theatre with a new generation of young children in the same costumes, eyes sparkling ready to see their iconic princess come to life. I was about to relive the nightmare tenfold.

I was the Scrooge amongst the carol singers, sat there just ready for my ears to once again go through the trauma of 'Do You Want To Build a Snowman?' The atmosphere was infectious - not because we're in the middle of a pandemic - but due to the excitement and feel-good energy which poured out of the audience. You couldn't help but feel it too! I was ready, the lights dimmed, the orchestra started, and the crowd which would normally fall silent instead cheered.

Off the bat we're given two incredibly talented young girls who star as Elsa and Anna, the confidence they have for their age is inspiring - especially Anna. It's hard to portray the same energy which we get from Disney cartoon characters, they always dial their animations and expressions up to 11 - however these two young girls were able to match it and then some.

As desperate as I was to keep up my facade of a tough girl in her late 20s, I instead experienced my inner child bursting to come out and I just went with it. I inhaled the magic which danced across the stage, the set design which illuminated whenever Elsa used her powers and the costumes which made you forget a full-grown man was standing behind a tiny snowman puppet - Olaf was as real as they come. And can we just applaud the creativity that is Sven the reindeer? Whenever I saw him on stage I just thought the poor soul inside him must have incredible backache.

But we all know what the crowd are waiting for, the big number - the sparkly blue dress reveal and my lord did we get it. Disney didn't hold back, they knew this was the climax of the show, the blue dress has become the staple of Frozen, the image. It starts, from the first chord the audience cheers then falls silent - as the incredible Danielle Fiamanya who was starring as Elsa powerhouses her way through the number whilst the castle of ice is built behind her, we reach it - 'Let It Go!', and the audience goes wild, a stunning dress is revealed which sparkles so much it looks nearly animated. Emotion pours out of me, I couldn't explain it - was it because I've been away from the theatre for nearly two years? Were the words speaking to me more than I could imagine? What was going on! Why am I crying?! The song ends, the interval begins and everyone exhales. The woman next to me turns and she is crying too. I think we're just all going through the same things - every emotion you could feel came out, and we let it go.

If like me (now an ex Frozen Scrooge), you've happily locked away Frozen - never to hear the songs again. I ask you to just let it out one last time, just for this musical. I could review all the characters individually, Anna was literally Anna (played by Stephanie McKeon), Hans was Hans (Oliver Ormson) - they were the Disney characters brought to life, each and every one of them. But instead I just wanted to applaud the entire cast and production for not only dissolving my stiff attitude, but for thawing the tension and emotion I didn't realise I was feeling all this time. It was good to be back. 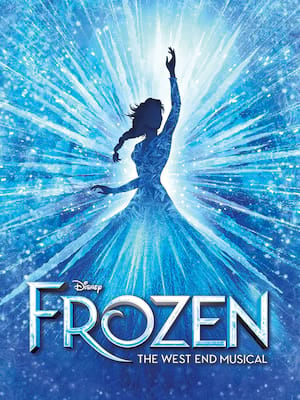