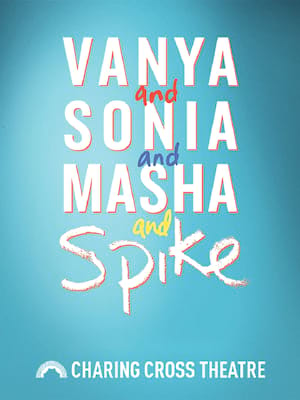 Vanya and Sonia and Masha and Spike

The show's a ton of fun even if you can't tell your 'Seagull' from your 'Uncle Vanya.'

Why See Vanya and Sonia and Masha and Spike?

First running on Broadway in 2013, the critically acclaimed, Tony-winning play borrows elements from Chekov's undisputed masterpiece Uncle Vanya, such as character names, the setting of a cherry orchard and the theme of the possible loss of an ancestral home. Adult siblings Vanya and Sonia still live in their old family home, bemoaning missed opportunities and lost dreams. When their young movie star sister Mash arrives with her boy toy Spike, Durang's wit whips up an absurd whirlwind of one-upmanship, broken mugs, and frayed nerves.

Seen Vanya and Sonia and Masha and Spike? Loved it? Hated it?

Sound good to you? Share this page on social media and let your friends know about Vanya and Sonia and Masha and Spike at Charing Cross Theatre.