Treat the theatre lover in your life with tickets to some of London's biggest shows!

Christmas is only a few days away and if you are panicking about your unfinished shopping list, then have no fear as we have the answer. With tickets to London's biggest shows, treat your loved one to the ultimate live experience in 2021!

With London's theatres being dealt another COVID-19 related blow just before the Christmas period it's now more important than ever to show them that we love them. From musicals to plays, to family shows London's West End has everything you need to make 2021 the best year yet!

FOR THE MUSICAL FAN

BACK TO THE FUTURE - THE MUSICAL (Adelphi Theatre from 14 May): Great Scott! Hit 80's franchise Back To The Future has gotten a new lease of life with this brand new musical. After a hugely successful run in Manchester in 2019, Robert Zemeckis and Bob Gale's creation flies into London's Adelphi Theatre for a hotly anticipated West End debut. The perfect gift for musical and Back To The Future fans, don't miss your chance to grab the hottest tickets in town! BOOK TICKETS

ANYTHING GOES (Barbican Theatre from 8 May): Olivier and Tony award-winner Robert Lindsay and Emmy award winner Megan Mullally star in this 2020 revival of Cole Porter and PG. Woodhouse's iconic musical, Anything Goes! A reimagining of Kathleen Marshall's Tony-winning 2011 production this glitzy new presentation will leave you tap-dancing all night long with musical theatre hits like, "It's De-Lovely", "I Get A Kick Out of You", and the titular "Anything Goes". The ultimate show for any musical theatre lover, don't miss your chance to see Anything Goes in 2021! BOOK TICKETS

SIX (Lyric Theatre): The Queen's are back and are better than ever! Having dominated the London theatre scene since 2018, this fun-filled and sassy tuner reintroduces you to the unlucky wives of Henry VIII and their untimely demises. A punchy, full-throttle and glitzy affair this British creation from Toby Marlow and Lucy Moss is the perfect antidote to compensate for the dark winter nights and the perfect gift for, well, anyone! BOOK TICKETS

FOR THE DRAMA LOVERS

THE OCEAN AT THE END OF THE LANE (Duke of York's Theatre from 23 October 2021): Hot off its sell-out Christmas run at the National Theatre in 2019, Katy Rudd and Joel Horwood's spellbinding adaptation of Neil Gaiman's highly acclaimed novel heads to the West End this coming October. Gaiman's fantastical adventure comes to extraordinary life on stage with breathtaking effects, puppetry and more, making this one London event not to be missed!
BOOK TICKETS

MAGIC GOES WRONG (Vaudeville Theatre from 21 October 2021): The magical minds at Mischief Theatre have teamed up with magicians extraordinaire Penn & Teller to bring you Magic Goes Wrong. This hilarious comedy follows a troupe of hapless magicians as they try to perform their tricks with disastrous consequences! BOOK TICKETS

FUN FOR ALL THE FAMILY

WICKED (Apollo Victoria): This West End phenomenon has been enchanting London audiences since 2006! With wonderous magic, roof-raising songs (we all know "Defying Gravity") and spectacular performances Wicked really is the toast of London. Whether it's their first or one-hundredth time experiencing this musical magic, Wicked will give the theatre lover in your life a night to remember! BOOK TICKETS

From musicals to plays, to comedy shows, London Theatreland has everything you need to make 2021 perfect! 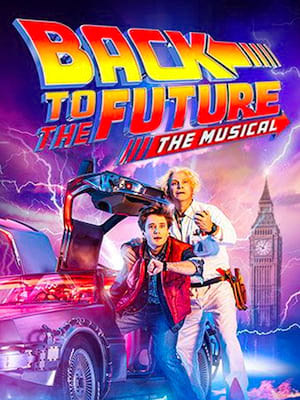 A near-seamless slice of escapist entertainment.Even the time machine's a triumph in this larky musical version of the 1985 cult movie classic