Sorry! You missed Summer and Smoke at Duke of Yorks Theatre 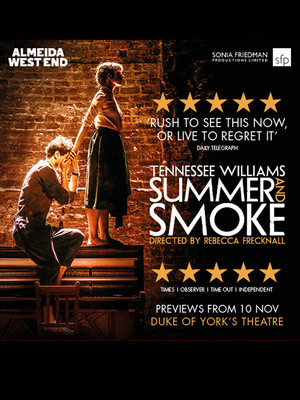 Frecknall's account has both soulfulness and fluidity... the crucial relationship between Alma and John can never have felt so layered - or so painful.

Why See Summer and Smoke?

After a critically acclaimed and sold-out run at the Almeida last February, Rebecca Frecknall's beautiful production of Tennessee William's Summer and Smoke heads to the Duke of York's Theatre this winter. With original stars, Patsy Ferran and Matthew Needham continuing to lead the production, Summer and Smoke is set to be this season's stand-out masterpiece.

Described as 'spellbinding' by the Financial Times and 'captivating' by The Stage, Frecknall's stripped down production stole the hearts and minds of the critics, bringing Williams' forgotten play into the light once more.

What is Summer and Smoke about?

Set in Glorious Hill, Mississippi, Summer and Smoke centres around a highly-strung, unmarried minister's daughter, Alma Winemiller (Ferran), and the tug-and-push will-they won't they near romance with John Buchanan, Jr. (Needham), a fun-loving and unruly doctor who grew up next to her. Whilst he is in pursuit of her romantically, she rebuffs him, wanting spiritual fulfilment instead. However as the years pass she realises that he was the one for her all along; but does he still feel the same way about her?

Full to the brim with beauty and pain, comedy and heart-ache, this revival is one not to be missed

A Tennessee Williams masterpiece is brought into the limelight once again in the Almeida's West End transfer of Summer and Smoke. Full to the brim with beauty and pain, comedy and heart-ache, this revival is one not to be missed.

Seen Summer and Smoke? Loved it? Hated it?

Sound good to you? Share this page on social media and let your friends know about Summer and Smoke at Duke of Yorks Theatre.