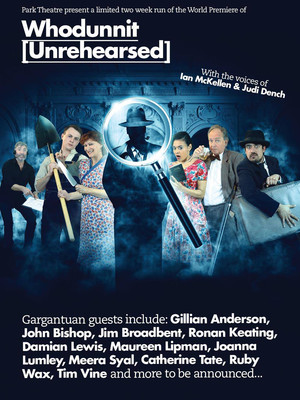 The likes of Gillian Anderson, Catherine Tate and Joanna Lumley take to the stage!

A whole host of A-list celebrities are heading to the Park Theatre in North London this July as they raise funds for Park Theatre's glorious work. Voiced by acting royalty, Ian McKellen and Judi Dench, the play's cast will change every night. Although you won't find who is on the bill until the curtain opens, stars who are scheduled to tread the boards include Gillian Anderson, Clive Anderson, Jim Broadbent, Juliet Stevenson, Joanna Lumley and many, many more!

Whodunnit (Unrehearsed) is a classic murder mystery where that evening's celebrity guest will step into the role of the Inspector. But, the star in question will step out onto the stage without having ever seen the script before! Prepare for the night of your life in this unique event and help the Park theatre continue its incredible work within the local community!

1 hour 50 mins with one interval

Sound good to you? Share this page on social media and let your friends know about Whodunnit (Unrehearsed) at Park Theatre.