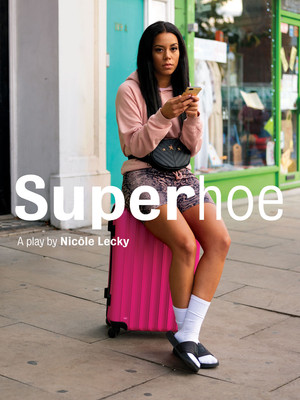 Written and performed by the immensely gifted Nicole Lecky, Superhoe is a one-woman show that premiered as part of Talawa Firsts in June 2018, and will run in the Royal Court Theatre's Jerwood Theatre Upstairs at the start of 2019. Directed for both presentations by emerging talent, Jade Lewis, Superhoe is the first collaboration between Talawa Theatre Company and the Royal Court Theatre. It tells the story of Sasha, a pretty and talented young woman with high reaching dreams but not much motivation to work for them. Superhoe explores the hidden homelessness of a twenty-something-year-old in London and the rise of social media escorting.

Sasha Clayton is a young adult living at home in Plaistow with her mum, step-dad, and a little sister who grates on her nerves. She once ruled the roost as the most popular girl at school, but now spends her time scrolling through social media alone in her bedroom. With no job, a boyfriend who has gone AWOL and her family's plans to move away without her, all Sasha has is her talent, ambition and the belief that everything will surely change for the better when she releases her first EP! But in the meantime, what does an unemployed young woman in London do without a job and no support? She may just have to rely on the one other thing she has... a pretty face. Sasha wants to be famous for her music but her attempts to reach her dream seem to take her further and further away from them.

The Big Idea: In Conversation with Nicole Lecky Tuesday 12 February post-show. This event is free with a ticket to that evening's performance.

Sound good to you? Share this page on social media and let your friends know about Superhoe at Royal Court Theatre.